The origin of this breed unites the history of all Iberian Mastiff and its development is linked to the transhumance route on the peninsula.

Shepherd's Companion with specific functions to guard against the attack of the Wolf, since always prolific in the area. In remote times, this dog was fixed in the regions of Portugal, notably in Trás-os-Montes.

In this mountainous region, which is characterized by steep fields of pasture and of difficult

access road, this breed has adapted to conditions in the region and the type of sheep and goats that traditionally has pasture in these areas, evolving, until it locks morphologically, in perfect symbiosis with the conditions and the type of work that was requested.

Over the centuries, the wandering tribes of Asia, moved from East to West, establishing new tribes and herds that were accompanied by the mastiffs of guard and protection. These dogs from common umtronco, acquired and maintained its own characteristics that today allow differentiates them from region to region. The history of all mastiffs of Iberian and European herds are so interconnected, and you can find an origin common to all the racial variants adapted locally.
In the Iberian Peninsula there are about 4000 years ago, tribes who were based in shepherding their source of livelihood. In defense of herds against other tribes and predators used large dogs and bravery, brought from Asia minor. The temporary displacement of the herds in the Iberian Peninsula (Transhumance) as the seasons, led to the dispersal and fiction of these dogs in various regions, creating different races if the regions were distinct, well-defined and isolated by large rivers or inhospitable mountains.

The story of the Cão de Gado Transmontano is linked to the origin of the remaining Portuguese Mastiff, showing even some similarities with the short-haired Estrela Mountain Dog and Alentejo mastiff. 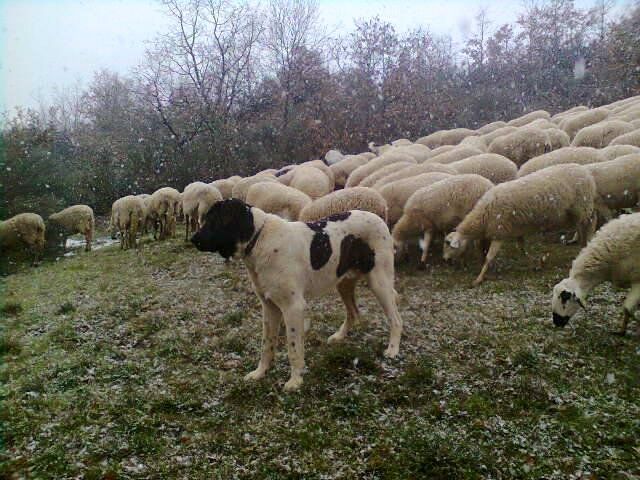 The regions of Trás-os-Montes, Serra da Estrela and Alentejo are characterized by an austere climate of continental type (nine months of winter and three of hell). It is natural that in similar climates and in regions near these three types of Portuguese mastiffs were evolving with very similar characteristics.

The morphological and functional differences of the three races due to the type of relief and the presence or absence of predators (Wolf) in their regions. In Trás-os-Montes and in the Serra das Star settled large dogs and brave, with greater agility, lightness and resourcefulness, because the rugged landscapes and the Wolf so determine, other large and also brave, more heavy and strong presence established in Alentejo.

In the 70 and 80 due to the dramatic decrease in the number of wolves and due to the abandonment of most herding people of Trás-os-Montes, this time turning to the coast of the country or abroad in search of better life opportunities, o Cão de Gado Transmontano ceases to be useful and falls into oblivion by staying near extinction.